My sister and BIL came to stay a few days with us on July 18 to help us prepare for the birth of our sweet baby boy who was due in two weeks.   The next day, Monday, I felt awful.  I was dizzy, nauseous, my feet were gigantic and I had a horrible headache.  Since I was 34 weeks I had been monitoring my blood pressure per my doctor’s orders.   This day I knew my blood pressure was high.  I thought I would feel better if I propped my feet up and took a nap.  Well, I did.  But the next morning, dear hubby insisted I call the doctor to see if I could see Dr. P a day earlier (my weekly appt was set for Wednesday).  Keep in mind Dr. P is a doctor I was seeing until my real doctor came back from maternity leave which was supposed to be on 7/22.  I called the doctor and they could see me at 1 p.m.  I was feeling better at that point, and I just knew my blood pressure was fine that day.  We got to the doctor and my blood pressure was 148/80.  My feet were still swollen but I felt okay.  She checked me, and I was still dilated to ZERO.  So frustrating.  I just wanted to cry.  I told Dr. P that I wasn’t feeling Maddox move nearly as much as I used to.  She seemed kinda worried because he was always hyper in my belly and moving almost 24/7.  I was sent to have an ultrasound since it had been almost 17 weeks since I had my last one.  As soon as the lady put the “thingie” (not sure what it is called) on my stomach, she said “oooh”.  Yeah, that’s not what I wanted to hear!  She said my fluid levels were really really low.  It was actually at 4.  Dr. P said the normal fluid levels at my stage of the pregnancy are 10-20.  She asked if I had been leaking fluid, and I told her no.  The only thing I can think of is for the last few weeks I was going to the bathroom like every 10 minutes.  It would feel as if I really really had to pee but hardly anything came out.  Sorry, TMI!

Then came the best news ever!  They were wheeling me over to the hospital (I was so embarrassed to sit in that dang wheelchair, weird, I know), and we would be having a baby!  So many emotions came over us at that point.  We were nervous because we thought we had a little more time to prepare, and Wade would be taking the bar that next Monday, Wednesday and Friday.  We were excited because we were finally getting to meet our little miracle after 9 long months.  We were scared because we just wanted him to arrive safely.  We called our family who lived 4 hours away but told them not to come until the next day around noon.  Since I still had not dilated, I knew this would be a long process.  They wheeled me over to the hospital, and yes, I wore my shades the entire time while being wheeled over.  This was the most embarrassing thing to me.  Not sure why?  I could walk just fine!  I was in my room at 4 p.m. and was put on the drip around 7 p.m.  Around 8 p.m. I was in full blown back labor.  The contractions were getting stronger and stronger, but I only felt them in my back.  This was the worst pain I have been in.  It was painful and uncomfortable.  I kept having to rotate from side to side.  I was miserable.

They broke my water around 10 a.m. on July 21 which was a pain I cannot describe.  I wish they had broken my water after the epidural but they did not.  We were trying to hold off on the epidural as long as possible since we knew this was going to be a long day.  Around 11 a.m. I got my epidural, and let me tell you, it was nothing.  This is what I was most scared of.  All I have heard was “it hurts like hell,” and “they stick this HUGE needle in your spine”.  Let me tell you, I did not feel a thing.   At noon I received an unexpected visit from my original doctor, Dr. Boudreaux.  I was ecstatic and wanted to cry.  I loved my doctor.  We were pregnant at the same time, only she was 4 weeks ahead of me.  She heard I was in labor, and wanted to be there to deliver Maddox, as she promised months before.  She came back from her maternity leave a day earlier just to deliver Maddox.  She is the best doctor ever!  Dr. B checked me, and I was dilated to 1 cm.  Ugh!  I told her I didn’t know how much longer I could take of this.  After 16 hours of being on the drip, I was just miserable.  I had been throwing up from the pain meds they were giving me.  It was a long and awful night.  I was just ready to meet my son.  She said she would come back in a few hours or so to check me again if I really wanted to have him vaginally.  She gave me the option to have a c-section because she did not see me progressing much further.  Maddox was just being stubborn like his mommy!  I told her to sign me up for the c-section, and the suspense of who will Maddox look like was almost over!  All of our family arrived and we got to visit before they would wheel me back to meet the love.of.my.life.

The nurses came in and said my c-section was scheduled for 2 p.m. and they have to give me another epidural to numb the upper part of my body.  Another epidural?  Sure.  Bring it on.  I was eating those words.  The anesthesiologist told me that as soon as the meds reached my chest and heart level, it would feel as if I couldn’t breathe and not to panic.  Not to panic when I can’t breathe?  I don’t think so.  Well, he was right.  I thought I was going to die.  I could not catch my breath.  This was the weirdest and scariest thing.  My blood pressure was going up, and I was scared.  The doctor has to sit with my and help me pace my breaths.  It felt as if a 500 lb man was sitting on my chest just crushing me.  I eventually “caught my breath”, and we were ready for the OR.  Wade and I were about to meet our son, and we couldn’t be happier.  They starting cutting, and then I heard “you’re about to feel a lot of tugging and pulling”.  Boy, were they right.  I felt like I was in a plane that was going down.  The rumbling of my body and the shaking.  I thought I was about to fall off the table.  Then, at 2:13 p.m. Maddox Wade House was born, and the world stood still.  I could not believe I had just had a baby.  They raised him up so Wade could see him, and Wade said he was perfect.  This was the best news.  They took Maddox over to clean him up and they did his footprints in our baby book and on Wade’s mask which was soooo sweet!  This is something we will keep forever!  They brought Maddox over to me, and I was IN LOVE.  I finally met this little one whom I had bonded with over the last 9 months.  Wade went with Maddox to the nursery and I was wheeled to recovery.

Recovery was supposed to last an hour following surgery.  I think I got in there around 3 pm or so.  Around 5 pm or so, I still could not feel my legs nor could I move a toe.  My blood pressure was still high and they would not let me go to my room until I could wiggle a toe or something and my blood pressure was under control.  The entire time I was asking for Wade, but they would not let him back to be with me.  I was miserable for those two hours.  I had only seen my baby for a split second, and I wanted to cry.  I was finally in my room at 5:45 p.m. and was able to visit with everyone.  Everyone except Maddox.  The nurses came in to tell us he was making a grunting sound and they had to keep him in the nursery until the pediatrician checked him out again.  I was a nervous wreck.  He was also shaking.  Not a shaking from being cold or having a seizure.  He would have this little shake every few minutes or so.  Almost like a twitch.  They checked his sugar level and ran lab panels, but everything came back normal.   Dr. Vick, his pedi, eventually told the nurses to check his magnesium level.  Finally, we had an answer.  It wasn’t just an underdeveloped nervous system.  Maddox’s magnesium level was a little low which was causing his twitching.  What a relief.  I was finally able to hold him at 10:45 that night.  This was the best moment.  I had my family.  Just the three of us.  Wow. 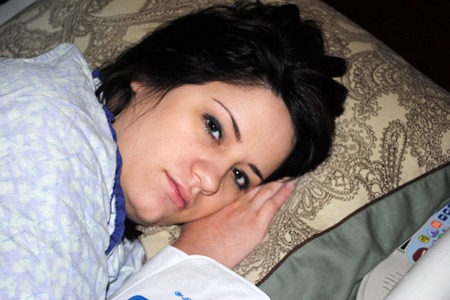 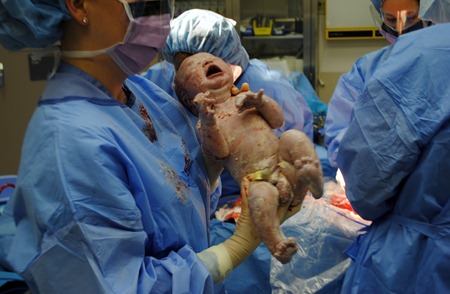 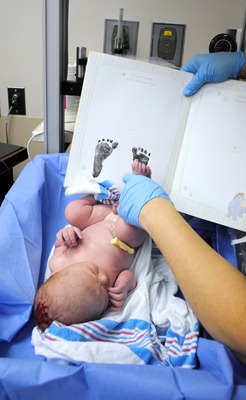 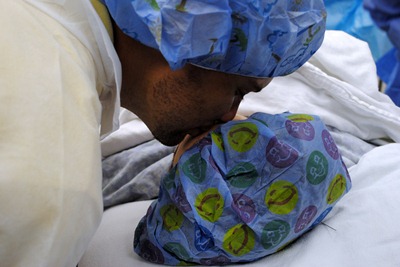 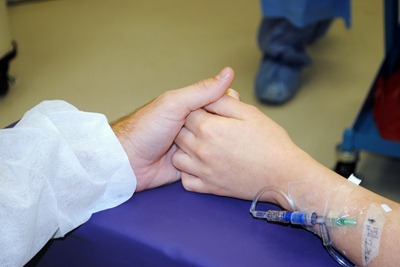 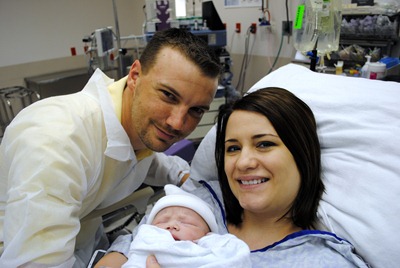 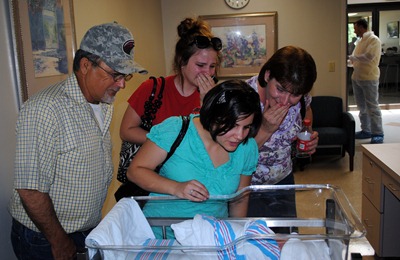 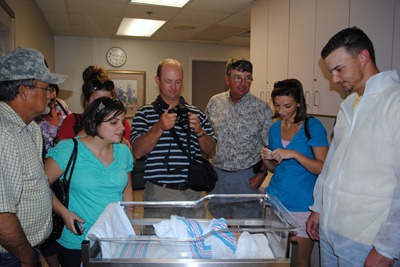 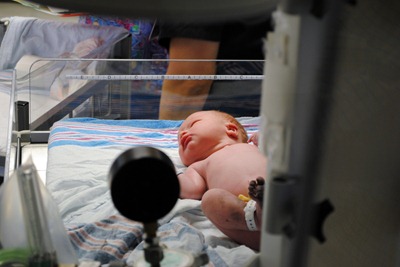 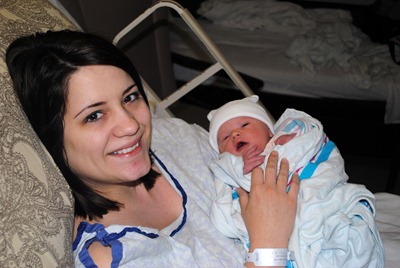 Maddox, you are two weeks old (as of this past Wednesday)!  You have been such a blessing to me and your daddy, and we cannot imagine our lives without you.   I have never been so excited to lose sleep in my life!  You have already changed so much since you were born. 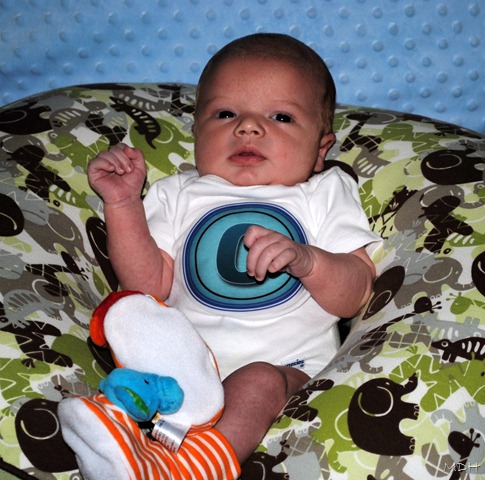 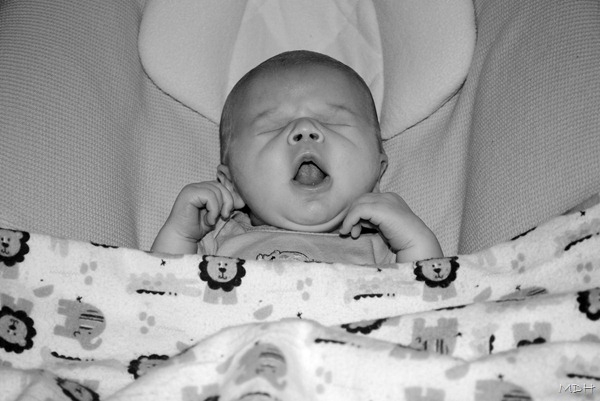 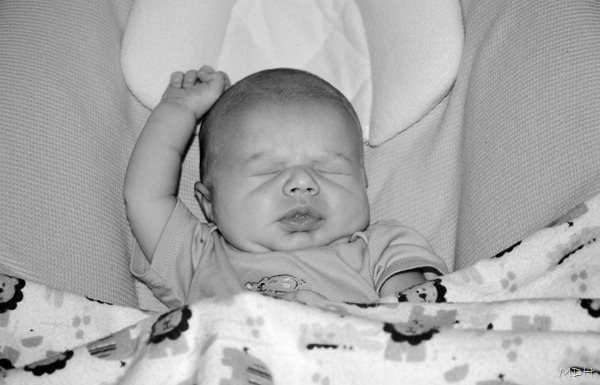 Your daddy and I love you so much, and these past two weeks have been the best weeks of our lives!