Since February Maddox has had 6 ear infections, and he has just felt awful.  Everytime we went to the doctor he would get a rocephin shot and antibiotics which neither helped.  The ear infections would cause Maddox to wake up some nights every hour screaming at the top of his lungs.  When he was a few months old, his pedi, Dr. Bodron, said he was a major wax producer.   Sometimes his ears were so full of wax that the doctor could not even see in his ear.

I started noticing that Maddox would pull on his right ear constantly.  I thought this meant his right ear was hurting.  Right?  After the sixth ear infection, I asked Dr. Ricks (new pedi since Dr. Bodron retired) to refer us to an ENT.  I just couldn't stand seeing Maddox sick all the time.  It seems that he has had a runny nose and cough since May, and he cannot get rid of it.

We saw Dr. Barham a month ago, and he said both of Maddox's ears had fluid on them and he needed tubes ASAP.  We scheduled the surgery for last Wednesday, but he couldn't have it then because he developed a viral infection the beginning of last week.  Dang daycare!

Maddox had his tubes put in yesterday, and he did great!  We had to be there at 6 a.m., and he couldn't have anything to eat or drink after midnight.   I thought this would be so hard because Maddox always takes a bottle around 2 a.m., but he woke up at 2:45, and we put him in the bed with us and he slept until our alarm went off.  No fussing at all!

We got to the surgical center at 6 a.m., and they took Maddox back around 7:45 a.m.  They gave him tylenol right after we got there so he took a 30 minute nap while we were waiting and played the rest of the time.  I thought he looked so cute in his gown so I snapped a few pics! 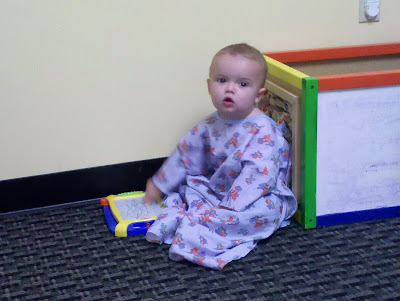 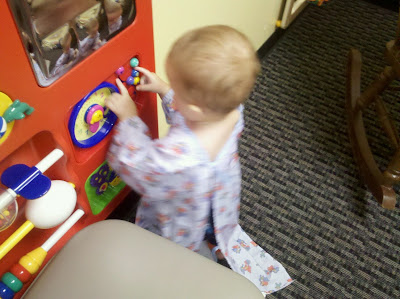 The procedure took literally 10 minutes, and he was in a recovery room.  The nurse told me that he would be groggy when he comes out and to just love on him and hug on him.  I had his bottle waiting for him because I knew he would be hungry.  When Maddox came in the room, he grabbed the bottle from my hands and laid on the bed.  I got no loving at all!  After his bottle he was ready to laugh, play and scream!  He was going ninety to nothing ALL.DAY.LONG.

Dr. Barham said Maddox's left ear was his bad ear, and that he had puss pockets in it.  Poor baby!  He also had a lot of fluid on his right ear.  I thought since he was pulling on his right ear all the time that it was his problem ear, but I was wrong.

Maddox slept all night last night for the second time since February!  PTL!  I felt like a new woman this morning after getting 8 hours of uninterrupted sleep!

When we picked him up from school, he was all smiles.  They said he had a really good day so I hope and pray Maddox will not have any more problems with his ears.  I love having my happy baby back!